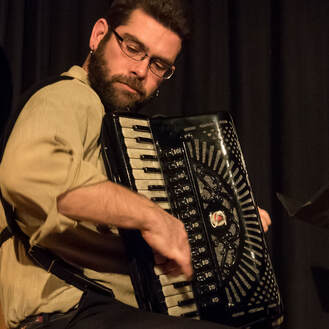 photo by Bringfried Seifert
Patrick Farrell is a United States-born, Berlin-based accordionist, composer and bandleader. He is an active part of the international klezmer community as a performer and teacher, plays with new-music and improvisational groups, and enthusiastically toots on an alto horn in various brass bands. Farrell has appeared on dozens of recordings, including with Yo-Yo Ma and the Silk Road Ensemble, Never Enough Hope, and Adrienne Cooper, and also enjoys working with dance and theater ensembles as a composer, music director and accompanist.  In 2019 he appeared onstage in the remount of the original Tony-award-winning Broadway production of Indecent.

Recent past ensembles include the esteemed avant-garde/traditionalist klezmer group Yiddish Art Trio (with Benjy Fox-Rosen and Michael Winograd), and unique and unusual duets with trumpeter Ben Holmes. For many years he led and composed for the circus/new-music group Stagger Back Brass Band, releasing one acclaimed album in 2009. Farrell also maintains his membership in Panorama Brass Band, from his former home of New Orleans, LA, during the annual Mardi Gras season. He plays in Frank London's Klezmer Brass All-Stars and Alicia Svigals' Klezmer Fiddle Express, and often works as arranger for various ensembles and friends.  He was recipient of a 2016 composition residency at the prestigious and beautiful  Brush Creek Foundation for the Arts. Farrell has studied accordion in Macedonia, Serbia, Germany, and Romania, and has played in clubs, concert halls, streets, and serenades all over Europe and North America.
NEW VIDEO!
Sveta Kundish & Patrick Farrell
"Ver hot gezen"
live at P.A.N.D.A Kulturplatform
Berlin, Germany
03 October, 2019